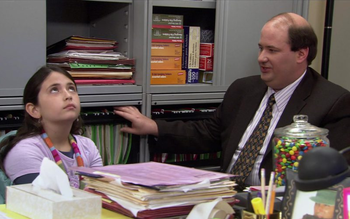 "The best thing about Take Your Kid to Work Day is you get a day off school! The worst thing is, Mum and Dad have really boring jobs."
— Henry, Horrid Henry
Advertisement:

Parents often want their kids to know what they do while they're at school, as well as let them explore the job market. What's the easiest way to do this? The hands-on approach: taking their child to work with them! Take Your Child to Work Day is a designated day for workers' children to shadow them; they miss a day of school to see the workplace, find out what their parents do all day, and maybe even find a hidden interest in the job. The event can either be arranged by the kids' school or the parents' institution, though the latter is more common in fiction, because it means many kids will be at the workplace on the same day.

More often than not, this will have the opposite effect, especially if the parent works an office job. When a child's brutally honest judgment is put on their parents' jobs, they will realize just how boring their work actually is. To counter this, the parent may take measures to make their job look much more exciting than it really is. Alternatively, the child may take matters into their own hands and cause some workplace shenanigans of their own.

May overlap with Awkward Father-Son Bonding Activity. Can be played for comedy, especially if a villanous organization does it.

Truth in Television: Take Our Daughters and Sons to Work Day

, founded in 1992 and continuing to this day, gives children from over 3.5 million schools across the the US the opportunity to get a glimpse of the working world.