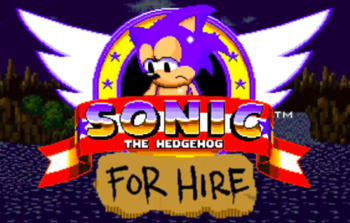 "Sonic is washed up and out of work. He needs cash fast and will do anything to pay the rent. Hangouts, murder, jobs, third-parties—it doesn't matter. Is there anything Sonic won't ever do for a buck? Short answer: No."
— Lowbrow's description of the series
Advertisement:

Sonic for Hire, temporarily known as Hedgehog for Hire under Rooster Teeth, is a parody series made by Lowbrow Studios. The series stars Sonic the Hedgehog as washed up and in need to find various jobs to pay debts such as his rent. Almost all of the jobs he is involved in the end in failure and several episodes have even ended in a few cliffhangers. Some of the recurring characters he encounters include Tails, Dr. Eggman, Earthworm Jim, Knuckles (Who works at BurgerTime), Kirby, Gilius Thunderhead, Mother Brain, Link, the Star Fox crew, Mario, and even Mega Man.

The series was seen on Machinima.com's YouTube channel and lasted from February 13, 2011, to December 22, 2013. The show ran for seven seasons, which were usually uploaded on Sundays (except for Season 6's premiere, which was shown on a Friday) around the mid-afternoon. There were also had a few mini-shorts related to the series that aired separately but are non-canonical to the main story. Unfortunately, numerous episodes for Season 7 were set to private or removed from Machinima's channel following an unknown situation, making the whole of season 7 a lost relic until Rooster Teeth picked the series up.

A teaser image on the show's social media pages, depicting the script for a season 8 episode, was posted on June 15, 2018

, with a later post announcing that the show would return sometime in 2019, under the name Hedgehog for Hire

due to copyright. The 8th season, along with the previous episodes, premiered on Rooster Teeth's website on March 19

, with eight new episodes. Additionally, Rooster Teeth has uploaded every episode into eight season compilations, allowing people to once again watch all the episodes that went dark on Machinima's channel.

In 2020, Lowbrow Studios got the rights to the series back, where they returned to the original name and reuploaded each season via remastered compilations on their Youtube channel. On January 23rd, 2021, Lowbrow Studios confirmed production of a ninth season, with the season planned to premiere in Early 2022

Sonic For Hire provides examples of:

Example of:
"Where Are They Now?" Epilogue