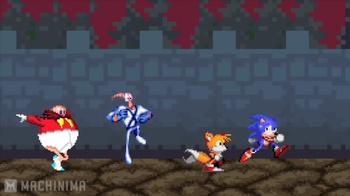 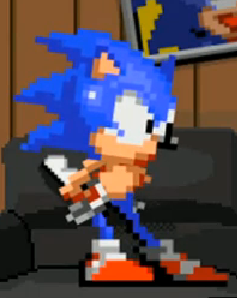 The main character of the show who is always looking for a job but fails almost all of the time. He is really lazy and rude but there are several moments where he does feel like he's accomplished something. 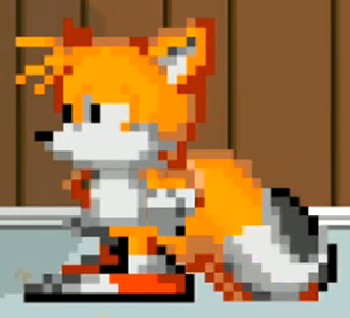 Sonic's put-upon sidekick and the show's Straight Man. While clearly smarter than most of his company, his inability to lead situations and his bossiness earns the ire of people around him. 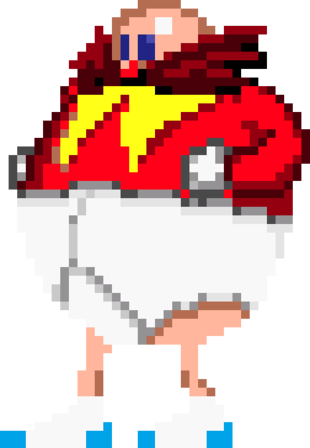 Long time enemy, new time friend of Sonic. After being little more than a nuisance in Season 1, Eggman comes to realize that he has nothing to do with his life if Sonic dies, and eventually becomes his friend. 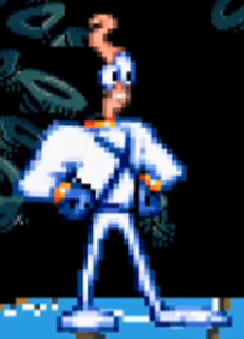 Earthworm Jim is one of the four main characters of the series and is a very close friend of Dr. Eggman.

Knuckles in this series has a pretty good life unlike Sonic, being the owner of Burger Time and a pretty sweet moped. However, Sonic then burns down his restaurant with a crack pipe and steals his moped for crack, in which Knuckles is forced to work at "Tre Douche." Soon afterwards, it's shown that Knuckles may not be as happy with his life as he seemed.

Sonic's and Mother Brain's daughter that was born after Sonic (intoxicatedly) had sex with Mother Brain. Mother Brain quickly gave birth to her, much to Sonic's chagrin. Sonic initially wanted to kill her off, saying that it'll prevent him from paying child support. However, after Soniqua saves Sonic from getting killed by Goro, Sonic values Soniqua (a lot more than Tails, that's for sure).

Unlike the friendly Kirby, this incarnation of Kirby is a psychopath. He murders innocent creatures and is known to randomly eat anything. In Season 4, he becomes a famous movie director and tries to help Sonic out.

A very incompetent and unpredictable ally, Thunderhead can get on anybody's nerves. Sonic meets him and he orders Sonic to have sex with Tyris, which Sonic finds disgusting. Even though this backfires, Thunderhead seems to like Sonic enough to help him against Mario's Mafia. He had a temporary stay at Sonic's mafia office, but once the crew started drifting away, Thunderhead got sent to jail after starting a bar and committing some crimes, and has gotten an obsession with "ass-wine" (putting a condom full of wine up his ass).

Link in this series has a "fabulous" personality. A bit scatterbrained, he's more concerned with fashion and margaritas than his actual job.

A former NBA Basketball player who played for the Atlanta Hawks, he is heavily featured on the poster that Sonic really likes to watch. After the poster's death in Season 2, Sonic orders the real Dominique Wilkins to be frozen in carbonite.

Princess Potato is a fanmade princess in the series, she has red hair & wears a blue dress she hails from a Mario knockoff game called Super Italian Labored Town (which doesn't exist), she knew Mario & his plan to rob Casino Zone, Potato is described as somewhat a whore *examples are shown in Peach, and Casino Zone: Part One * and she seems to be an alcoholic, and bossy. Her attitude was the reason why Sonic wanted her dead. She must've had millions of STD's because Kirby claimed he got gonorrhea in his mouth when he ate her, She later returns in Season 6 alive and still a drunk whore. She is revealed to be the President of the United States. In "Thunderhead" She steals the epoch to go time traveling and it causes Mario to come back.

A pair of people who hire Sonic to apparently kill a bunch of people. Or at least, that's what Sonic thought, when in reality they were a hallucination of Sonic.

Amy Rose is a female Hedgehog that has a crush on Sonic.

Bomberman (also goes by White Bomberman) is the main protagonist of his own series.

Eggette
Eggette is Eggman's daughter & main antagonist of the eighth season of Hedgehog For Hire. Despite the fact that she originated from Sonic Mania, inhabiting the sprite of the Spider-Mobile boss, her existence was entirely influenced by fanon. When the game got burned down, she left in search of her father. Being from a different Sonic universe altogether, she is under the misconception that Eggman is an evil genius and that Sonic is her bitter rival. As such, she is hellbent on taking over the world.

Mario and His Mafia

Once a princess saving plumber, now a high-end Mob boss. After Tails borrows money from Mario to bail Sonic out of jail, Sonic has to play hitman for the mob. After Sonic accidentally fails a mission and then lets Luigi get ran over on the following mission, Mario sets out to kill Sonic. Mario sends his Mafia friends to kill Sonic, but Sonic's friends help Sonic out and Sonic kills Mario, taking over the mafia. In Season 6, Princess Potato goes back in time and revives Mario, who wants revenge on the hedgehog.

Mario's younger brother who also works as part of his mafia.

The main character from Dig Dug, he is a part of Mario's mafia.

Blanka is a character from Street Fighter. He later joins Mario's mafia to kill Sonic.

Dr. Wily (Mafia)
The main antagonist of Mega Man who is part of Mario's mafia. Supposedly a completely different character from the one who appears in Mega Man Dies at the End.

Fox McCloud
The leader of the Star Fox crew and main character of Star Fox, he is a villain in the series, at the end of Season 5.
Slippy Toad
Voiced by: Stacey Silva

A member of the Star Fox crew (S)he is a frog & is very annoying.

A member of Star Fox crew, "Do a Barrel Roll".

A member of the Star Fox crew & secondary main character of Star Fox, he & Fox is a villain in the series, at the end of Season 5.

A character from Star Fox, he gives out space missions Sonic & Co. to do.

A giant space worm that lives in an Asteroid.

The main character of Star Wars.

A minor villain in the series, El Padrino is Red Falcon with the personality of a cocaine addicted South American druglord. He has his minions along with a bunch of coke whores who work for him. In Season 3, Tails serving as the mafia leader temporarily sends Eggman and Earthworm Jim to get a bunch of cash and cocaine from El Padrino. However, it seriously backfires as El Padrino decides to keep the two for entertainment and the two love the cocaine so much they decide to stay there. In Season 4, Sonic takes the two back, but El Padrino sends the "Marmosets", the coke whores on him, but Sonic easily takes them out and El Padrino lets them go.