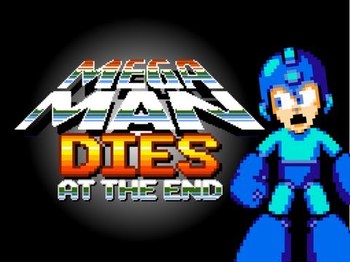 Mega Man Dies at the End

is a parody series of Mega Man made by Lowbrow Studios, who is known for making Sonic for Hire (and now, Morty Kombat). The series has a similar premise to Sonic For Hire, as Mega Man visits various video games. He's also washed up as well, but its for a different reason other than screwing around with money. He has been trying to find Roll (His sister), and after defeating Dr. Wily fifteen years ago, he started slowly disappearing and moving to the countryside with his Robot Dog Rush. In the present, a mysterious robot visits Mega Man and tells him that "he's up for one last job" and that they know information about Roll, along with offering him a huge reward. The mysterious robot turns out to have Guts Man work for him too, who serves as Mega Man's guide for the missions. Guts Man tells him to get power-ups that will help him with a really big job.
Advertisement:

Unlike Sonic in Sonic for Hire, Mega Man doesn't screw up his jobs.

After a hiatus near the end of 2012, the series returned for a special three part Series Finale, ending on March 23rd, 2013.

Mega Man Dies at The End provides examples of the following tropes: