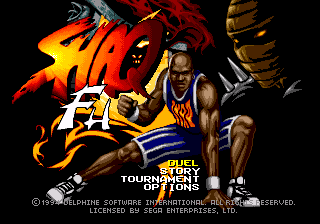 Shaq-Fu is a Fighting Game released in 1994. It was developed by Delphine Software Internationalnote yes, that Delphine and published by Electronic Arts. It was initially released for the SNES and Sega Genesis, and was ported the next year to the Game Boy, Game Gear and Amiga.

The plot is as follows: long ago, in a parallel dimension known as the Second World, ruled a powerful sorcerer known as Sett Ra. Planning to conquer Earth, he created a loyal servant from his own shadow, Beast, who murdered the Pharaoh, allowing Sett Ra to take his place. The Pharaoh's son, however, was not deceived, and sought the help of a powerful group of wizards, who managed to banish Sett Ra back to the Second World, weakened and imprisoned. A thousand years later, Beast finally managed to free his master from imprisonment; to put an end to his banishment, Sett Ra must now perform a ritual upon the Pharaoh's descendant, a child by the name of Nezu.

On Earth, Shaquille O'Neal is doing some sightseeing in Tokyo, as he is to compete in a basketball game for a charity event later that night, when he decides to stop by a kung-fu dojo. Inside, he meets an old martial artist named Leotsu, who informs him that he is the Chosen One destined to defeat Sett Ra. Shaq thus enters a portal to the Second World, in the goal of defeating Sett's battalion of warriors and rescuing Nezu.

Delphine, the developers of Shaq-Fu, had never created a fighting game before, with their main successes having been found in the Cinematic Platform Game genre. Due to this, Shaq-Fu is notable for sharing a lot more in common with their usual output in its controls and style than traditional fighting games. This is evident in the noticeable input lag, long animations with a lot of frames, very realistic character proportions, and zoomed-out camera.

Shaq-Fu is frequently seen in "Worst Games of All Time" lists, mainly because of a ridiculous plot and a severe case of Hitbox Dissonance. The Angry Video Game Nerd does a review

on it in Part 2 of his "Yet Another Christmas Carol" episode, and there's even a website dedicated to finding all copies of the game and destroying them

— and another dedicated to finding all copies of the game and saving them.

Coincidentally, EA also published a similar game that starred one of O'Neal's conference rivals a month after Shaq Fu, and both wound up on Nintendo Power's "Ten Worst Games of All Time" list.

known as Shaq Fu: A Legend Reborn was in the works. A trailer

dropped in June 2017, and the game was released on June 5th, 2018. In this continuity, Shaq is not a basketball player, but a Chinese orphan, trained in the ways of martial arts by an old master named Ye-Ye. After years of training, Shaq's destiny is revealed when the Chinese god of death, Yen-Lo-Wang, emerges from hell to destroy the world. Raised as a member of a secret society meant to drive the god back, Shaq must leap into action to defeat Yen-Lo-Wang and his hordes of demonic invaders. Purchasing a retail console copy of the game also unlocks a bonus campaign called Barack Fu: The Legend of Dirty Barry, which follows former President of the United States Barack Obama, now going by the codename "Dirty Barry", as he helps Ye-Ye stop demons posing as celebrities from taking over Earth before aliens from Uranus blow up the planet.

The original game contains examples of:

The sequel presents examples of: