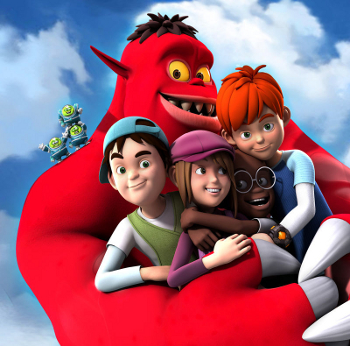 From left to right: the Beebees, Boom, Taki, Iris, Monroe and Linus.
Advertisement:

Linus & Boom is a French-Korean CGI-animated show by Genao Productions. It aired on French TV in 2009 and was sold abroad under the title My Giant Friend. It currently reruns on French channel Gulli.

Set in 2042. The valiant members of the Space Development Center (SDC) protect the Earth against those evil aliens who want to invade, control and eat innocent citizens...

Well, at least, that's what they'd like you to believe. Truth is, under the rule of Number 9, the SDC collects and enslaves any alien who has the misfortune to land or crash on Earth, turning them into Living Weapon, in order to one day rule the whole galaxy.

When a big red alien named Boom crashes on his balcony, the 12-year-old Linus has to hide him from the SDC. Thanks to Dr. K, Linus acquires the Scire Swatch which allows him, among other things, to put Boom under a human disguise at will. His friends Iris, Monroe and Taki soon join him in his mission to find aliens lost on Earth, free or protect them from the SDC, and safely send them back home. All of this while avoiding Chase, the most feared agent of the SDC. Things gets more complicated when Jenny, the girl Linus is in love with, develops a crush on Boom.

The show has some similarities with the Ben 10 franchise. The creators mentioned they got tired of young heroes slaughtering "monsters" without second thoughts and wanted to try something different. So their heroes do the opposite, protecting them. My Giant Friend tends to be formulaic with many points left unexplained (the 12 minutes format clearly didn't help the storytelling) but it has quite the charm, with interesting designs (both for aliens, mechas and technology), good music and endearing characters (especially Iris and Chase). The first season had 52 episodes and ended with an obvious Sequel Hook. A second season was planned and already written but got cancelled due to disagreements between the French and Korean producers.

Not to be confused with the show My Big, Big Friend.

Examples of tropes in My Giant Friend: