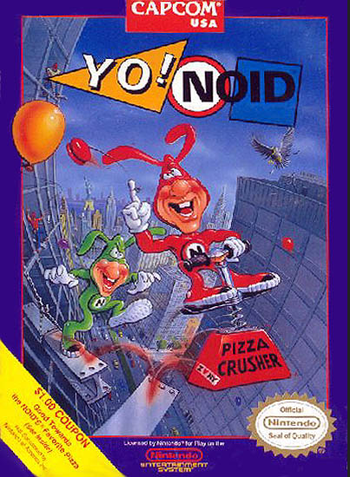 Yo! Noid is a platforming video game for the Nintendo Entertainment System, released in 1990. It was developed by NOW Production for Capcom. The plot involves The Noid, the mascot of Domino's Pizza, heading through New York City stopping wild creatures led by the mysterious "Mr. Green". The Noid uses his yo-yo weapon to thwart enemies. At the end of every other level, you participated in a "pizza eating" contest with another Noid, with the winner being the character who filled their pizza meter the fastest.
Advertisement:

Besides being an obvious bit of product placement for Domino's, the other curious aspect to this title is that it's actually a Dolled-Up Installment of a Famicom game, Kamen no Ninja Hanamaru. In that game, you played a ninja who, instead of a yo-yo, flung his bird at enemies. The pizza eating contests were originally traditional battles but played out in the same card-battle format. And the setting and story was completely different, with kids going missing from Fun Island and Hanamaru having to find them and stop who's behind it.

Has a Fan Sequel called Yo! Noid 2: Enter the Void. The Noid would not appear in another video game for a further 31 years, later starring as a minion in, of all games, Crash: On the Run!, as a cross-promotional tie-in with Domino's. ...We're not sure either.