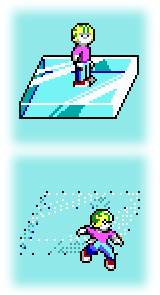 A temporary platform is an infamous variation of the Floating Platforms that exist primarily in 2D platform games, which can only be used for limited durations at a time. These come in a few distinct varieties:

Sometimes you'll encounter these platforms one at a time, but in most cases they will be arranged in groups, forming some sequence or pattern which the player must navigate across (Indy Escape style) as the platforms disappear (and/or appear) around them; sequences like these can become very Nintendo Hard when they are stationed above a Bottomless Pit or Spikes of Doom.

See also Goomba Springboard, for when a section of a game requires you to platform on enemies that die once you bounce off of them.

To reach the boss of this stage, one must navigate these disappearing blocks first.

To reach the boss of this stage, one must navigate these disappearing blocks first.