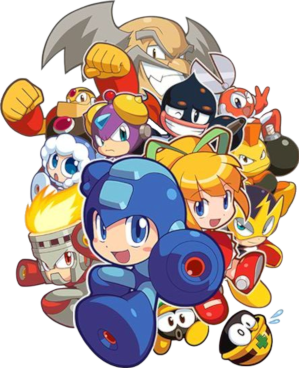 This version of Mega Man is utterly adorable.
Advertisement:

Mega Man Powered Up is a Video Game Remake of the first Mega Man game, with everything made ridiculously cute, released for the PSP.

This game goes by the first game's story, a Mad Scientist known as Dr. Wily takes 8 robots (Go down the page for a better explanation) from the benevolent Dr. Light, and his Helper Robot, Mega, decides to become a battle robot to save his brothers.

The game is unique in that you don't just get to play as Mega Man, and not just Proto Man, but every Robot Master in the first game, as well as Roll. The game also throws in many extras, including a "Classic Mode" (which recreates the original layouts of the stages in the games format, and even reuses the original music), a challenge mode, and even a level editor.

Suffice to say, the game received much acclaim when it was released, but due to a combination of the PSP getting off to a slow start, as well as fans being alienated by the chibi art style, the game flopped in sales, axing any plans to release further remakes of the NES Mega Man games.

Compare Mega Man: Maverick Hunter X, a remake of the first game in the Mega Man X series, which is also for the PSP.