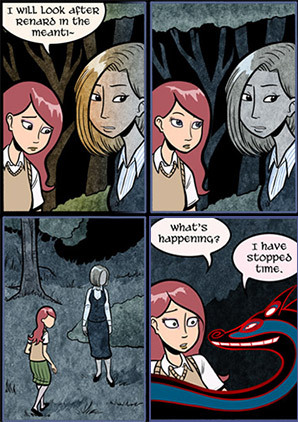 "Time stopped. Coates faded, in a world made up of shades of gray."
— Night Watch
Advertisement:

It's hard for authors to make it clear that time has stopped moving or merely slowed down from the character's point of view, and that's because...well, because it doesn't happen in Real Life, time being, in fact, famous for waiting for no man.

This brings forth a problem: how will the viewers know time has stopped? Well, we could just have everything freeze in place, but it would work only in areas where there are a lot of actions (or at least a single movement we can see clearly) to be interrupted at once.

Sometimes, however, the plot demands time to freeze during a scene with no cops shooting bullets to stop in mid-air or falling debris that refuses to fall or clumsy waitresses who drop glasses of water and are comically frozen in an awkward pose trying to catch it. Movies can avoid this easily; they may just refrain filming a timestopped sequence without these visual aids, or perhaps zoom the camera in on a bug that froze above the hero's head. Videogames that offer timestop as an ability have no such luxury; a player could try and stop time anywhere from a crowded street to a small empty room, and, as such, a new visual representation is needed. Such a visual representation is also useful in media such as manga and comic books, where the pictures are never moving; it would be rather clunky to include text to the effect of "yep, time's still stopped" in every panel until it starts up again, after all.

One common solution for that is to simply colour the area affected by the timestop with a filter, and thus we have a convenient Colour-Coded Timestop.

These usually come in two flavors: either the timestopped area changes from colourful to a grayscale or sepia-toned zone, or it may have all of its colours turned negative. These are not the only kind of Colour-Coded Timestop, but are certainly the ones that get used the most. Almost invariably, the character(s) who caused time to stop will be exempted from the colour shift, so if you see anybody still in normal colours that means they can still move.

Please note that this trope applies to any Color-Coded Bullet Time as well.

Example of:
Move in the Frozen Time