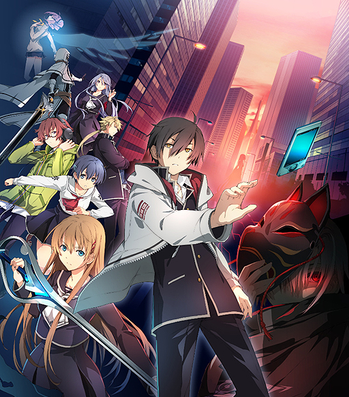 A spin-off of Falcom's Xanadu series, Tokyo Xanadu is first for the company in that, as opposed to being set in a fantasy world, it is set in an alternate version of the real world, specifically Tokyo. It is an Action RPG with the graphical engine of The Legend of Heroes: Trails of Cold Steel, released on September 30, 2015 for the Play Station Vita.

Set in the fictional city of "Morimiya" on the outskirts of Tokyo, the story follows Kou Tokisaka; an Ordinary High-School Student who works at various overnight part-time jobs to make ends meet while his parents are working overseas. One night, he finds his classmate Asuka Hiiragi being stalked by delinquents, and tries to intervene to save her when out of nowhere, a strange gate appears and draws all of them inside an unknown place. Kou then finds Asuka defeating some monsters using a sword, saving both Kou and the delinquents from them. But before he could ask questions, Asuka erases his memory, and Kou wakes up barely remembering what happened.

The next day, Kou attends class at Morimiya Academy, and later works at another part-time job in the evening. After finishing work, Kou finds his childhood friend Shiori being pursued by an invisible creature, and gets drawn into another strange gate. Asuka arrives just in time to deal with the situation, but strongly insists Kou to turn back immediately. However, Kou regains his memory of the night before, and all of a sudden, a strange light grants him a Soul Device; a weapon that can defeat monsters called Greeds. Surprised by this, Kou tags along with Asuka to save his friend Shiori from the monster pursuing her.

He is later informed that Morimiya is plagued by a phenomenon known as the Eclipse, which commonly spirits people away into labyrinths where Greeds inhabit. Asuka is a Wielder and an Enforcer of an organization called Nemesis, and her job is to search out for Eclipse gates and defeat the Greeds inside to negate them. Since Kou gained his Soul Device and became a Wielder himself, he also tags along to help Asuka defeat the Greeds.

Later, as the story progresses, more students from Morimiya Academy get involved with the Eclipse and become Wielders themselves, and together with Kou and Asuka, they form the Xanadu Research Club (X.R.C. for short) in order to protect Morimiya City from the Greeds.

An enhanced port of the game, Tokyo Xanadu eX+, was released on September 8, 2016 for the PlayStation 4 and Steam on December 2017. It features side-stories for most of the playable cast, an after-story taking place months after the main story, and previous NPCs Promoted to Playable.

Surprising many fans, the original Play Station Vita game was released by Aksys Games in the United States on June 30, 2017, whilst eX+ was released in fall of the same year.

Compare Tokyo Mirage Sessions ♯FE, a Fire Emblem/Shin Megami Tensei spin-off also removed from the former's medieval fantasy roots to be set in modern-day Tokyo. Tokyo Xanadu is also often compared to SMT's spinoff Persona, in which several aspects of said game were appropriatednote Kou's Intelligence, Courage and Virtue meter, as well as the overall storyline of an alternate dimensional plane overlayed over the the town and being accessible through some means only the protagonists are aware of.