Video Game / NEO: The World Ends with You

This page contains unmarked spoilers for The World Ends with You, including Final Remix.

Greetings, Sheeple of Shibuya! The Game has begun anew! 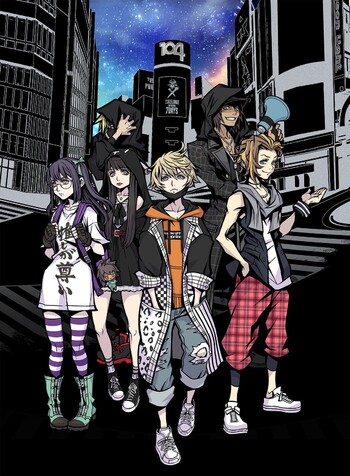 Shibuya citizen Rindo Kanade enjoys a rather normal day while meeting up with his friend Tosai "Fret" Furesawa. However, the day suddenly takes a turn when they witness people battling monsters in broad daylight, only to be further confused when Game Master Shiba announces the beginning of a new Reaper's Game. Rindo and Fret find themselves "accidentally" becoming participants and, together with their group, compete against other groups of players in order to have a second chance at life again by becoming the top team at the end of the week, unless they happen to come dead last and face erasure.