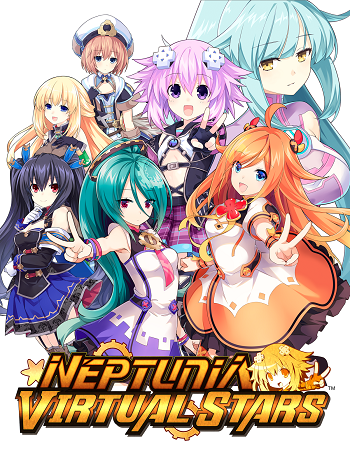 Counter-clockwise, from the center: Neptune, Blanc, Vert, Noire, You, Me, and Faira
The tenth spin-off game in the Neptunia series, Neptunia Virtual Stars is a Hack and Slash game, though with a focus on gunfire over melee combat. The defining feature of this installment is the focus on Virtual Youtubers, such as hololive, appearing in the game as potential allies. The game was initially released in Japan for PlayStation 4 on August 6, 2020; the North American PS4 release was March 2, 2021, followed by a European PS4 release March 5, 2021, and then an international PC release on March 29, 2021.
Advertisement:

Enter Virtualand - a digital world that exists alongside the networks of various dimensions. Within Virtualand lies the planet Emote - a planet faced with extinction due to the maleficent group of Content destroyers known as Antis. In an act of desperation, the Digital Goddess of the planet Emote, Faira, sends a distress signal to other dimensions in hopes to find a savior of this planet. And the saviors that were reached? The rising Vtuber stars, Me and You, members of MEWTRAL, as well as the Goddesses of Gamindustri: Neptune, Noire, Blanc, and Vert! Can MEWTRAL and the Goddesses band together and save the planet Emote from complete destruction?