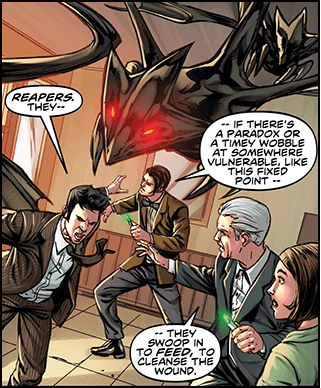 "You brief humans think of time — if you think of it at all — as a natural thing. Ubiquitous. Inevitable. You are blind little fish in the waters of a vast, deep cave. There are... others, who see time differently. When it is meddled with, they notice."
— Castle Heterodyne, Girl Genius
Advertisement:

Time, like Death, hates being tampered with. It uses things like Hitler's Time Travel Exemption Act to stop changes to itself, and the Butterfly of Doom to exact roundabout retribution, but sometimes the determined chrono-criminal can find ways around these defenses.

In cases like these, time likes to get its hands dirty and ensure a less ironic and more graphic end to these pesky revisionist historians with the help of Clock Roaches.

Clock Roaches are time's clean-up service. They eat and destroy people and things that directly threaten time with a Temporal Paradox. Like roaches, they "eat up" the crumbs and mistakes of time travelers, and if they directly make nuisances of themselves, eat them as well. Also like roaches, you can never kill them all, nor hope to survive against their mindless fury for long. At best, you can delay them, and hope to fix whatever it is you've messed up and marked you as Roach-Chow.

In a way, Clock Roaches can also be seen as time's immune system. In a scenario where you inflict damage to the timeline by way of your meddling, you are the threat, and so these entities come out of the woodwork en masse to ensure you are stopped.

The concepts of Clock Roaches probably stems from the difficulty in representing the threat of creating a time paradox. It's hard to show that the whole of existence is about to slip down the timey-wimey chaotic vortex of fate, and that it's definitely bad. It's much easier to write when anybody who dares to transverse the spacetime continuum gets eaten by an Eldritch Abomination. You could call them Chronos' Vengeance.

One of the possible results of a Time Crash. Compare to the Necro Non Sequitur, a gratuitous and Rube Goldberg-y way for time to deal with interlopers. Not to be confused with the Butterfly of Doom, in which the insect punishing the time traveler for interfering with the natural progression of events does so by dying, when it's not just a metaphor to begin with. Time Police is similar, but is where creatures like this are part of a formal organization. Similar are creatures out for those who mess with space. You may look for examples in Hyperspace Is a Scary Place.

Not related to the insectoid Dungeons & Dragons construct of the same name; they, and any other roaches made of clockwork, are a kind of Clockwork Creature. However, it is possible for Clock Roaches to be a Clockwork Creature. Has absolutely nothing to do with the Thackery T. Lambshead Cabinet of Curiosities.