Literature / The Hounds of Tindalos 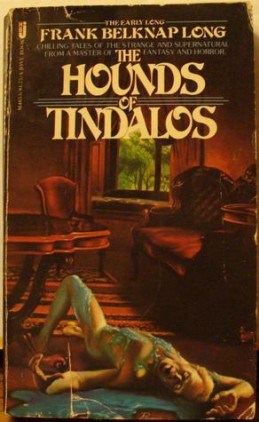 "The Hounds of Tindalos" is a horror story by Frank Belknap Long, first published in Weird Tales in 1929. It is regarded as part of the Cthulhu Mythos.

The narrator recounts how a friend of his, Halpin Chalmers, took to experimenting with consciousness-expanding drugs and Mental Time Travel. After taking an exotic drug, Liao, Chalmers claims to have pushed beyond curved space-time into angular time, where he saw horrifying and incomprehensible entities — and was in turn seen by them. Fearing that the entities, which he refers to as "the Hounds of Tindalos", mean to pursue him back into the mundane world, Chalmers attempts to foil them by clearing out a room and plastering over the corners and edges to make a space containing only curves, no angles through which the Hounds can manifest. However, an earthquake shatters the plaster, and Chalmers is found dead the following morning.