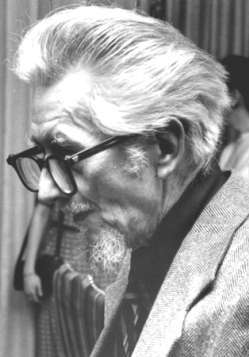 Frank Belknap Long (1901-1994) was an American author and editor, best known for his contributions to the Cthulhu Mythos. In the 1920s and 1930s, he wrote for a wide variety of pulp magazines, and also published some volumes of poetry, with the help of his friend H. P. Lovecraft and others. In the 1940s, he added comic-book writer to his resume, writing scripts for Superman, Green Lantern, and many more. In the 1950s, he started working as an editor for several magazines. He continued writing throughout his life. Though most of his work was science fiction and/or horror, he covered a wide variety of other genres over the years, from mystery to gothic romance. He wrote a biography of his old friend, H. P. Lovecraft in the 1970s.

His best known contribution to the Cthulhu Mythos is the Hounds of Tindalos, creatures first introduced in his short story of the same name. The story was the first Mythos story written by someone other than Lovecraft. The Hounds have appeared in several other stories by Long, Lovecraft, and many others.

Works by Frank Belknap Long with their own pages:

Other works by Frank Belknap Long contain examples of: