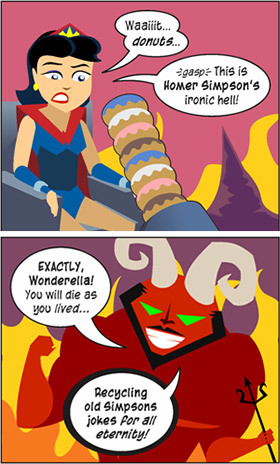 "D'oh!"
"Gluttons can't eat or drink in Hell because they ate and drank so much in life. And they are trapped in putrid soil because they produced nothing but garbage in life. And they are being torn apart constantly by Cerberus's three sets of bloody teeth because Dante is one sick motherfucker."
— Lore Sjöberg, The Book of Ratings, "Dante's Inferno Punishments, Part 1"

Most depictions of Hell involve some form of eternal punishment for the damned souls who are sent there. In Ironic Hell, they get a more personal service. Each sinner gets a punishment that is an ironic reminder of the sins of which they are guilty. A glutton might be force-fed something unpleasant for eternity (a common version is that they're fed something they enjoyed — ceaselessly, becoming wholly sick of it, for eternity), or might be prevented from eating ever again.

Many examples of Ironic Hell are references to Dante's Inferno (Canticle 1 of The Divine Comedy), which depicts Hell in this way. It was published in 1314; however, the basic idea goes back even further. The Greek myths that involve Tartarus often utilize this trope.

Your Lit professor would probably call this "Contrapasso

", Italian for "counter-suffering", which means "the punishment fits the crime."

Often coupled with Self-Inflicted Hell and/or The Punishment Is the Crime, and may also overlap with Cool and Unusual Punishment. A late realisation of this may be This Isn't Heaven. For the temporary version where you don't even have to die to get an ironic punishment, see Laser-Guided Karma. Sub-trope to Overly Specific Afterlife.

Frieza's personal Hell is being trapped in a cocoon on a tree over a field of flowers, with a stuffed animal marching band and fairies trying to "cheer him up".

Frieza's personal Hell is being trapped in a cocoon on a tree over a field of flowers, with a stuffed animal marching band and fairies trying to "cheer him up".