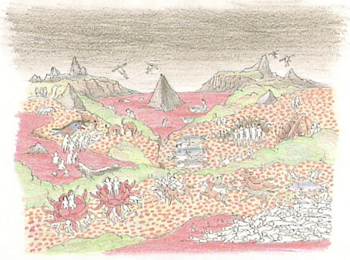 "The vision of paradise depicted here is distinctive to Hanuda."
"If this really is the work of God, then I'd say She has lousy taste."
— Vincent, Silent Hill 3
Advertisement:

Not all shady cults and religious nuts belong in this category. If someone believes the god they are trying to summon is going to bring on a new era of hugs and puppies, only to discover to their horror that all it does is unleash mayhem and rain of fire upon the world, it's not this trope. However, if the person knows from the start that their god is going to bring mayhem and rain of fire in its wake, but sincerely sees this as the epitome of ultimate bliss, then you have an Infernal Paradise.

If a character ends up in one of these, they may have been Rerouted from Heaven. Or, if they deliberately sought it out, a Hell Seeker.

Most instances of Warrior Heaven are this for non-warrior cultures (who may mistake it for Hell Is War). Contrast A Hell of a Time and Hell of a Heaven. Subtrope of Esoteric Happy Ending. Not to be confused with This Isn't Heaven, which is when something that seems Heavenly turns out to be a twisted form of Hell.