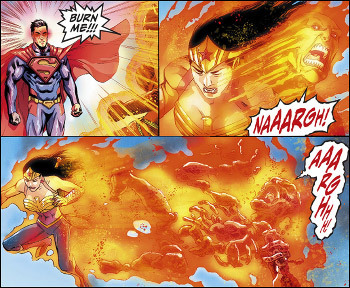 Probably not the coolest example...
"Flame purifies all."
— Title of a painting, Silent Hill 3
Advertisement:

Fire in some works has the ability to burn away imperfections and evil. It burns up evil or evil-associated creatures, such as demons and the undead, entirely, and it works more effectively against those beings than most weapons or attacks would. It can also sometimes burn away only the evil parts, leaving any pure or good parts unharmed. In such cases, it is useful for de-possessing hapless creatures who have been possessed by evil beings.

This ability draws on fire's association with life and its ability to burn impurities out of metal as well as the ability of hot objects to kill bacteria and decompose poisons; combining these ideas to create a force against evil. This will often be a form of magic fire, but sometimes all fire will have this property.

In some settings, the characters will believe that fire has this property, and act accordingly, even though fire does not actually have any extra powers against evil.

This may be a reason why Fire Keeps It Dead, the trope for where burning a body prevents it from coming back to life. Supertrope to Burn the Undead, which is where the purifying powers of fire cause the undead to be vulnerable to destruction by fire. Compare Heal It With Fire. Often associated with Sacred Flames. If the purification has to do with the magical properties of the fire, then it's an example of Magic Fire.