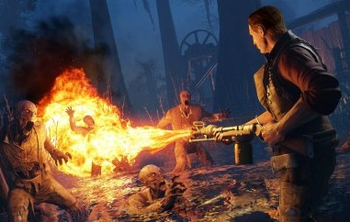 The flamethrower: Giving 'em a taste of hell before they're sent there.
"Burn the bodies, lest they stand up again."
—Gemini Home Entertainment, WORLD'S WEIRDEST ANIMALS

A very common weakness shared among The Undead is fire. Chopping such creatures into little bits may not stop them, but fire generally will. They also often burn more readily than is strictly realistic.

Sometimes the internal justification for this trope is that the undead regenerate (part of the same magic that keeps dead flesh and bones moving at all), and all monsters who regenerate in the setting are vulnerable to fire, likely due to the fact that fire destroys with a completeness that little else can match. Or, for ghostly undead, fire and other energy attacks may be less likely to pass through them than physical ones. In the case of zombies, it's often tied into some variation of killing The Virus (similar to the practice of cremating the bodies of those who died from illness to prevent the spread of infection), destroying the brains by frying them, or, failing that, destroying and melting enough muscle and cartilage to prevent them from moving.

Vampires are particularly associated with this trope, but it is certainly not limited to them.

A subtrope of Fire Purifies and Weak to Fire. Frequently overlaps Fire Keeps It Dead, which is where burning prevents creatures from coming back to life in the first place (the overlap is when killing undead with fire also stops them from respawning). Also compare Burn the Witch!, which has similar reasoning behind it. Contrast Infernal Retaliation, where trying to set an undead on fire simply makes things worse for you. This is a common property of Sacred Flames.