Pure Is Not Good 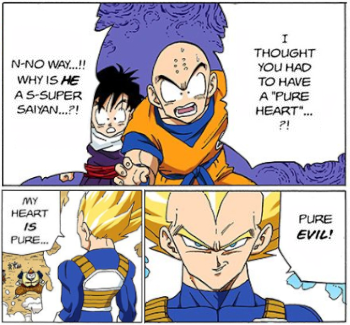 A heart of gold is hard and cold.
"The legend said the heart must be pure — it never said pure good."
— Harm, Young Justice (2010)
Advertisement:

Okay, so you've been told that in order to make the Phlebotinum work, or go to this particular place, or what have you, you have to be pure of heart. And then you get there, and there's the Big Bad. What?!? Turns out Pure Is Not Good.

In fact, it's perfectly possible to be Pure Evil.

In Japanese Media, this trope is likely rooted in the philosophical concept of Makoto, which loosely means "pure (heart/mind/soul/motives)". It basically means a mind free of distractions, unnecessary thoughts, doubts, or fallacies and is mostly used in the context of hard work, loyalty, determination, and intense emotion. Makoto, while considered a "good" thing, is not limited to good intentions. For example, a villain completely dedicated to villainy, a Fully-Embraced Fiend, a Knight Templar fanatically and self-righteously obsessed with a cause, or someone making destructive knee-jerk decisions would be demonstrating makoto. Their dedication is "pure"; their goals, not so much.

This trope is solely for "pure of heart" where purity does not necessarily denote goodness. Any resemblance to being a trope about pure substances is... ahem... purely coincidental. And no, we're also not touching anything resembling "ethnic purity," which ain't good either. For that, see Prejudice Tropes.

May make use of Virgin Power as a specific form of purity. Speaking of celibacy, Eunuchs Are Evil can go either way: a villainous eunuch may be characterised as pure due to his lack of sexual development,note though in some cases, sex can still occur after castration, or as impure due to his physical mutilation. See also Ambiguous Innocence, Light Is Not Good, Straight Edge Evil. Contrast Incorruptible Pure Pureness. Not to be confused with Complete Monster, a character who is considered "pure evil" by their story's standards.