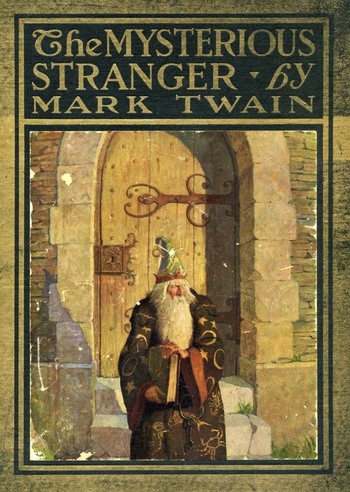 In Medieval Europe, three boys meet a charming teenager who claims to be an angel; in fact, his name is Satan. Predictably, no good comes out of this.

Also known as No. 44, The Mysterious Stranger is one of Mark Twain's last works that he was unable to finish before his death. It was written just after his wife and favorite daughter died and Twain entered financial trouble, so it was much more vicious and depressing than any of his other works, and many of the bitter and misanthropic things Satan says are as good as coming from Twain himself. There are three different versions of the work in varying degrees of completion, but all involve the titular mysterious stranger using his powers to show how much of a Crapsack World we live in.note Though in one of the versions he's not Satan.

Another version of the story is perhaps best-known for receiving an Animated Adaptation in the claymation film The Adventures of Mark Twain, being the Signature Scene in an otherwise overlooked movie. While that movie is generally a lighthearted adventure, the adaptation took a nosedive into Surprise Creepy territory as Satan explains his misanthropic, nihilistic philosophy to a group of impressionable kids, playing God with a doomed civilization that he destroys from within and without. This is a children's movie. It still manages to be an effective Adaptation Distillation of the novella, keeping most of Satan’s philosophical arguments and key quotes while condensing it to a few minutes, although instead of appearing as a young boy he appears as an empty suit of armor and a mask.

As an interesting side-note, it has long been suspected that this was one of the works that inspired Neon Genesis Evangelion, particularly the character of Kaworu. Yoshiyuki Sadamoto, writer of the Evangelion manga, has practically admitted as such.

The full text can be found here

. Tropes from any version of the novella are welcome.