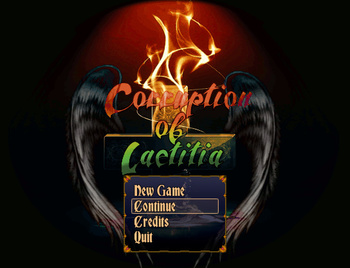 Corruption of Laetitia is a 2019 freeware, Yuri, RPG Maker game developed by Kayako Amaya. It can be downloaded here.

The protagonist, Celeste Avadona, is a half-angel Valkyrie who was raised by the Elysian clergy to fight the demons overrunning the world of Laetitia. She and her paladin allies eventually storm the Ramarian Keep and defeat the Demon Lord, allowing them to choke the demons' main access point to the mortal realm. But this victory is short-lived, as Cardinal Alfredus Marian betrays Celeste and prepares to sacrifice her to steal her divine power. Before Celeste is killed, the Demon Lord, Malayna Erundar, offers to turn her into a demon in order to save her life, to which Celeste accepts. Joined by defecting priestess Riliane d'Elphegort and succubus Gaia Grune, Celeste must work with her former foes in order to end Marian and the Elysian Order's reign over the nations of Elphegort and Eidelwalt. And in the process, she may just fall in love with one of her allies...

The main gimmick of the game is the use of a Karma Meter. You can make various choices to either increase or decrease your corruption, which will have an effect on how the story progresses. Lessening corruption will allow you to complete a series of sidequests and gain powerful items, while increasing corruption gives you more soul essence, which can be traded for more attacks and units for the Strategy RPG sections. Or you can choose to be neutral and keep your corruption level where it is.

Compare to Luxaren Allure, another Yuri RPG staring four women on a quest to defeat an Evil Overlord.

Corruption of Laetitia provides examples of: