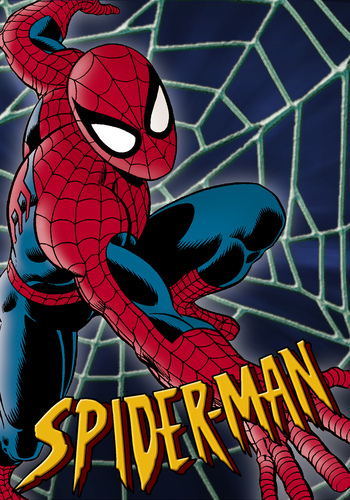 Spider-Man, commonly referred to as Spider-Man: The Animated Series after a certain other comic book cartoon that came out around the same time, is The '90s Animated Adaptation of the popular Marvel Comics superhero Spider-Man. Premiering in 1994, it ran for five seasons on Fox Kids. The animated series chronicles the story of a single, nineteen-year-old Peter Parker attending his first year at Empire State University, trying to get by through his part-time job as a photographer for the Daily Bugle, adjusting to new relationships, and growing into his newfound alter-ego as the amazing Spider-Man. The production history has it meant to be a tie-in to a James Cameron made Spider-Man movie that was never made (eventually passed over to Sam Raimi to become the well-known film trilogy released over half a decade later).

Being made in the 1990s, and not being Batman: The Animated Series, the Saturday-morning cartoon came under heavy censorship — heavier, in fact, than even other Marvel cartoons of the time. Spider-Man almost never threw a punch, and most of the action sequences were either Deadly Dodging or swinging kicks. Never Say "Die" was in full force and there was even a joke among the staff that they couldn't even disturb any pigeons on the rooftops for fear one might have been hurt. The corner-cutting animation also often left a lot to be desired, featuring static movement, constantly recycled sequences, bewilderingly fast conversations and scenes, and all manner of video goofs.

However, even while hampered by the vehemently severe censorship and shoddy animation, even while given strict instructions to keep the cartoon as simplistic as possible, story editor John Semper and his writing team managed to "sneak in" everything that made Spider-Man the series it is, that being compelling character development and story arcs. It condensed the major Spider-Man stories from the comics in a very efficient manner, so much that this version of those stories became engrained over the originals. There was a great number of recurring characters from all over the Marvel Universe, each of whom have a particular spotlight episode or even story arc the series followed, all the time keeping a strong focus on Spider-Man and his interactions with all of them. This hit the spectrum from obscure minor characters to Captain America, Nick Fury and S.H.I.E.L.D., plus concurrent Marvel animated shows at the time like Iron Man: The Animated Series and X-Men.

The series' legacy lives on. Not only is it one of many '90s cartoons responsible for introducing a new generation of fans into the world of comic books, but several of its plot elements were later integrated into the blockbuster films that followed it. And despite getting Screwed by the Network, at 65 episodes, this was for the longest time the single longest lasting Spider-Man cartoon until Ultimate Spider-Man and the second-longest Marvel Animated Adaptation after X-Men: The Animated Series. Even after being cancelled, it continues to have reruns going to this day in the U.S. and in various other parts of the globe (of course, the reruns are even more censored). It also inspired the visual style of The Amazing Adventures of Spider-Man ride at Universal's Islands of Adventure theme park, even after its 2012 refurbishment.

The finale of the 90s animated series features a team-up of several Spider-Men to prevent Spider-Carnage from destroying the multiverse.

The finale of the 90s animated series features a team-up of several Spider-Men to prevent Spider-Carnage from destroying the multiverse.