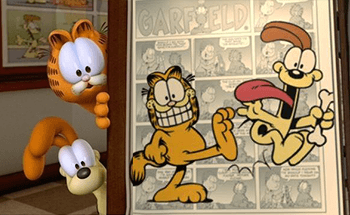 Sam: I think I know what this is!
Dean: Okay, what?
Sam: It's a TV show.
Dean: Ya think?!
Sam: I mean, here, wherever here is, this Twilight Zone Balthazar zapped us into. For whatever reason, our life is a TV show.
— Supernatural, "The French Mistake"
Advertisement:

When characters in an ongoing story suddenly find themselves in a new fiction that views their entire history as a work of fiction, you're watching a Real World Episode. The intended effect is to make the audience believe that the characters have broken through the Fourth Wall and entered your reality, as this new fiction is a stand-in for the real world. Stories with these plots are popular because of Deconstruction and Lampshade Hanging jokes, as well as Self-Deprecation. Sometimes it's a form of raising the stakes, as at least two worlds may now be in trouble. The original world may turn out to be a product of someone's mind in the real world or it may be independent, with the real world inhabitants somehow learning about this parallel universe's story and becoming familiar with it as mere fiction, so to speak.

This trope is related to, but distinct from, Refugee from TV Land. There, a character is pulled out of a Show Within a Show, whereas a Real World Episode concerns characters the viewers have been following for some time prior to this, and no indication had yet been given that they were in fact in-a-universe fictional (other than the fact that they, y'know, exist in a TV series, movie, book, comic, or video game in the real-real-life). Quietly implies The World as Myth and can be paired with a "Reading Is Cool" Aesop.

Compare Mage in Manhattan (where a powerful villain from another world, but not always another fiction, comes to assault the world of the audience), Up the Real Rabbit Hole (where the "topmost" universe is recognized, sometimes arbitrarily, as the "real" one), and Tomato Surprise (where we learn the protagonists are not what we expected them to be). Contrast Trapped in TV Land (basically the inverse of this). Definitely not to be confused with an episode of The Real World.