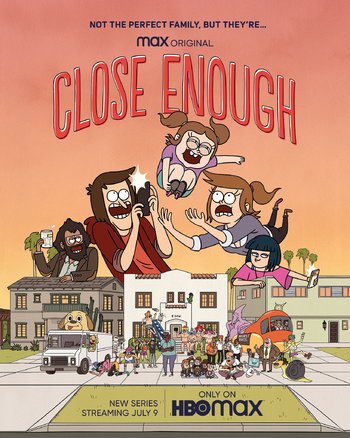 Not the perfect family, but they're...
Ah, you know the rest.
Advertisement:

A surreal take on transitioning from an irresponsible twenty-something to a somewhat responsible thirty-something, the series revolves around a married couple, Josh (an aspiring video game developer who works at a Best Buy-style electronics store) and Emily (an aspiring musical comedian), who live in a Los Angeles apartment alongside their five-year-old daughter, Candice; their two divorced best friends, Alex (a community college professor) and Bridgette (a social media influencer who doesn't have a regular 9-to-5 job because she's from a wealthy family); their landlord, an elderly black former policewoman named Pearle, and her white, adopted son Randy, employed as the apartment's handyman.

Each day, Josh and Emily find themselves juggling such everyday challenges as parenthood, friendship, growing older in a society that worships youth, ham theft, stripper clowns, conservative Christian dinosaurs, talking dogs who are fans of Jim Carrey, and choosing the right daycare.

Originally scheduled to air in 2018 as part of a new adult animation block on TBS, it fell into limbo after production on companion show Louis C.K.'s The Cops was cancelled due to C.K. being outed for sexual misconductnote though Final Space ended up airing anyway, a short-lived and mostly forgotten series Tarantula! also aired, but didn't get renewed for another season; and American Dad is still on TBS. Close Enough would premiere two years later through HBO Max on July 9, 2020. Season two released on February 25th, 2021, following the announcement that HBO has ordered a third and fourth season

. The third season premiered on April 7, 2022. International distribution via Netflix began on September 14, 2020. As of October 25, 2021, the show has premiered on TBS and TNT via their shared Front Row block.

The HBO Max series trailer can be viewed here

, and the original pitch trailer here