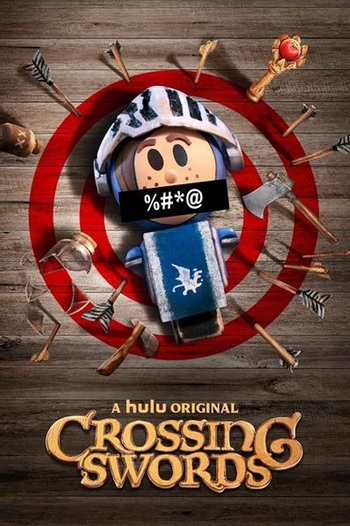 The dark ages are about to get lit.
Advertisement:

Crossing Swords is an adult animated comedy premiering on June 12, 2020 on Hulu, created by John Harvatine IV and Tom Root, who were previously best known for their writing and directing duties on Robot Chicken. Just like Robot Chicken, it is in Stop Motion Animation, but instead of Barbie doll-like figurines, small wooden peg-like dolls not unlike the ones you see from vintage Fisher Price toys are used. Despite what this would have you believe, the show is far from being for kids, as you would expect from a Spiritual Successor to Robot Chicken.

The series takes place in a Theme Park Version of The Middle Ages and follows young Patrick who achieves his life-long dream of becoming a squire for the tyrannical and inept King Merriman and Queen Tulip, and instantly regrets it after finding out the truth about them. Even worse, his criminal siblings have also returned to make his life hell. Throughout the series he is forced into all sorts of misadventures that go completely against his morals.

Despite mixed reviews, the show was renewed for a second season a week after release.