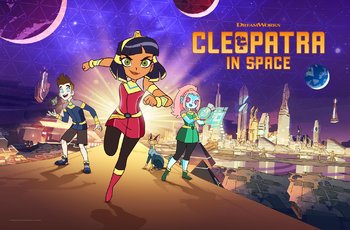 It's written in the stars! note Left to right: Brian, Cleopatra, Khensu, and Akila.
"Some say I'm just a kid
But I stand tall like a pyramid
One day, I'll be mythic
Read about it in hieroglyphics..."
— "Do It Yourself" Theme Tune, sung by Lilimar
Advertisement:

Cleopatra in Space is an American animated television series produced by DreamWorks Animation, based on the graphic novel series of the same name by Mike Maihack.

The series focuses on 15-year-old Cleopatra VII (Lilimar Hernandez) as she gets transported 30,000 years into the future, to an Egyptian-themed planet that is ruled by talking cats. She discovers that she is the prophesied savior of the future world. In order to prepare for her role and mission, Cleo is sent to an elite academy where she has to train to take on the bad guys, figure out how to eventually get herself back home to Egypt, and tackle the highs and lows of being a teenager in high school with her best friends Akila (Katie Crown) and Brian (Jorge Diaz), and her teacher Khensu (Sendhil Ramamurthy).

Originally slated to premiere on Universal Kids in the United States, instead the first five episodes of the series were released early onto NBCUniversal's Peacock streaming service on April 15, 2020, for Xfinity users. For those who don't have that provider, the series premiered nationwide on July 15. It would make its debut on Hulu almost a year later on July 14, 2021. Worldwide however, the series first premiered on the DreamWorks Channel in Southeast Asia on November 25, 2019. The series also premiered on Teletoon+ in Poland on February 17, 2020, dubbed into Polish. In Australia, the series premiered on ABC Me on August 3, 2020.

It's written in these tropes; all, all, this show can be...

The opening theme to Cleopatra in Space explains that Cleo gets sent into the future where she'll have to adhere to a prophecy and fight evil.

The opening theme to Cleopatra in Space explains that Cleo gets sent into the future where she'll have to adhere to a prophecy and fight evil.