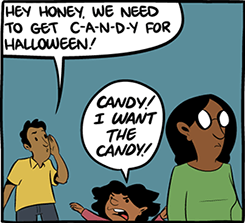 Whenever people (usually parents) want to discuss something they don't want anyone younger (or dumber) to know about, they tend to spell it out because they figure that kids can't spell (which is somewhat fair, as English is notorious for having numerous words that are spelled quite differently to how they're pronounced). Usually Played for Laughs, and is Truth in Television. In comedy, usually results in the person being spoken to not understanding what was spelled and/or the person who's supposed to be locked out understanding perfectly.

This can also be done with animals (e. g., mentioning a C-A-T within earshot of the dog).

Compare T-Word Euphemism, in which only one letter is used to represent an entire word. Not to be confused with Spell My Name with a Blank or Year X. May lead to Misspelling Out Loud. Contrast Spelling for Emphasis, which is spelling to make the word have more impact.