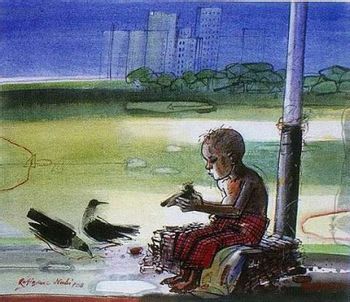 ♫ Riff raff? Street rat? I don't buy that ♫.
Riff-raff, street rat
I don't buy that
If only they'd look closer
Would they see a poor boy? No, siree
They'd find out they're so much more to me
— Aladdin, "One Jump Ahead" (reprise), Aladdin
Advertisement:

A kid, usually an orphan, who has lived on the streets for most of their short life. Survival is a matter of stealing whatever they need, doing odd jobs, and/or stuff you'd probably rather not think about. They may actually have a home or family, but the situation there may be so bad that living on the streets is preferable, or they're out stealing for their family's sake.

The vast majority of them usually grow up into street gangs or worse, but the ones we usually deal with have a run-in with the hero of the story. Older characters usually end up becoming an older brother or father to them, or at least friends. In this case, they might end up Recruited from the Gutter.

Street Urchins are usually boys, but having the character suddenly revealed to be a tomboy is just as common. Not quite a Wholesome Crossdresser, she just really doesn't have the money for any feminine clothes. Not to mention that, in many places like this, it's probably for the best that some people not know you're a girl. Though there are a few examples of openly and obviously female urchins.

Expect them to have a Cockney accent, even if they're American. They also tend to wear flat caps.

If the character seems perfectly happy with their lot in life and practically seems to thrive on the streets, then you have yourself The Artful Dodger. If this character grows up into a hardened survivor and is proud of his hungry years, you've got a Satisfied Street Rat. If your character isn't human, expect an Ear Notch or two. They may end up regularly assisting the heroes as a Baker Street Regular.

A very sad case of Truth in Television, but far, far worse out here.