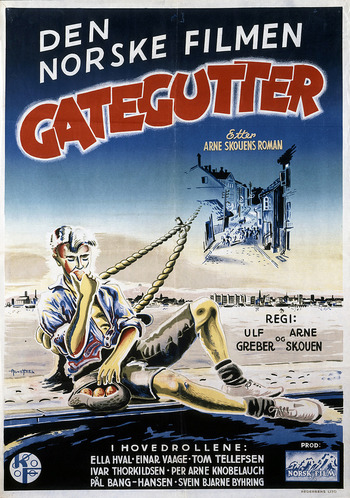 Street Urchins (Gategutter) is a Norwegian Movie, made in 1949, being the first Movie directed by novelist and Movie producer Arne Skouen.

The movie relates the life of several boys, most of them teenagers, living by, off, and on the streets in Oslo during The Roaring '20s, a period of great social turmoil, strikes and class struggles. The actual "roaring twenties" are far from the harsh reality of the boys in question.

The main character is sixteen year old Karsten, a youngster looking for a job and a purpose. His great hope is to become an electrician, but noone is able to take him in as an acolyte. He and the other boys live by stealing from local trucks, and one of them, Gofred, is injured in the process. While Karsten is quite decent, Godfred is not. Karsten has a home and a mother, while Godfred has none. He lives by himself, hiding the fact that his mother is severely ill, or even dead. Of the other boys, one is even more well off, having both his parents alive and living with him, and he is the one filling them in on the political problems at the time. The youngest one, Sofus, is living with his grandmother, and wishes to become a tin smith. Sofus and Karsten gradually bond, after Gotfred turns to the worse, and harasses Sofus.

Most of the boys try to get jobs, but there are few jobs to be found. Karsten is taken in as an acolyte at an electricity store, but is tipped off, and is warned that he will never be an actual acolyte - he is just being used. When he tries to get his way, he is simply fired without more discussion, and is off in the streets again. Sofus, at the same time, helps off an old tin smith Close by, and because the old man actually acknowledges the boy, Sofus ends up with an occupation after all.

A big strike is on, and the boys choose sides, fighting off the "scabs" or strikebreakers. Thus, the entire gang get in trouble with the Law. Gotfred ends up in custody, while the others, who have parents, is let free with a warning. The movie ends with Karsten and Sofus walking into the sunset, dreaming of a better future.

The Movie can be seen here