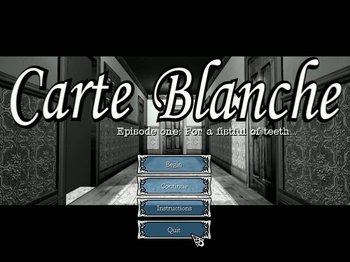 Carte Blanche (subtitled Episode one: For a fistful of teeth) is a Point-and-Click Game developed by Montréal-based developer Absurdus and released in 2006.

The game follows Edgar Delacroix, a freshly-graduated history student with a comfortable upbringing that was sent by his parents from small Quebec City to Montréal in order to become a man. He resides in his uncle's appartment, and quickly finds a job at the private investigating agency led by Hardboiled Detective Gaspard Lemaître and his secretary Jeannine. He is given two cases: taking some compromising photos of an adulterer and his mistress, and figuring out who stole a Mayan statue from Gaspard's friend Telesphore's antiques shop.

The game is Deliberately Monochrome, and has a jazzy soundtrack, seeking to immerse the player in a Film Noir atmosphere of 1924 Quebec, albeit a heavily-comedic one. There is tons

of optional dialogue, and all voice actors were bilingual; they did both the English and French voices for the game.

This is the first game in the "Kraken Trilogy", beginning with another one made by absurdus, Eye of the Kraken, unconnected story-wise with Carte Blanche. The final episode, Eight Tentacles of the Apocalypse, intended to tie the stories together, has yet to be released (see Vaporware on the Trivia page).