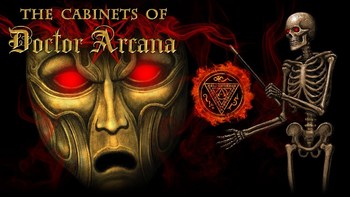 Prepare to be confounded.
Advertisement:

The Cabinets of Doctor Arcana

is a point-and-click Puzzle Game produced by Joseph Vargo. It is an escape room-esque game about a nameless protagonist who approaches a sinister, abandoned mansion on Halloween night, and is challenged to solve an entire house's worth of puzzles by the enigmatic Doctor Arcana.

More than twenty years ago, Doctor Arcana was a renowned magician, illusionist, and mystic. One day, he vanished, and no one knows what happened to him. His home at Arcana Manor has been locked since, and though there have been reports of strange things happening inside, no one has ever investigated. On Halloween night, you suddenly find yourself at the gates of the impressive manor, with no memory of how you got there. The only clue is a heavy metal amulet, passed down through your family. Within the house are many rooms full of puzzles, clues, and mysteries, and you must navigate the house to find the thirteen keys which will allow you to leave. Otherwise, you will be trapped there forever.

Released in October 2018, this is the first video game that Vargo has published. He intended to create a Spiritual Successor to classic puzzle games like The 7th Guest. The game's title is a Shout-Out to The Cabinet of Dr. Caligari. The game's concept was based on a puzzle segment from Vargo's Dark Realms magazine, and the puzzles that appear hidden in every Nox Arcana album. The story of the game ties into Nox Arcana's album Theater of Illusion, about a secret society of wizards. It features a spooky atmosphere, a beautiful Gothic setting, Nox Arcana's music, and much of Vargo's artwork.

A sequel, Doctor Arcana and the Secret of Shadowspire

, is currently in production and will pick up where Cabinets ends. Doctor Arcana and the player are whisked away to an unfamiliar island, where the player will enter the eponymous castle, Shadowspire, and attempt to pass a series of trials left by the Elders of the Arcanum. New artwork for the game was made public in July 2021, and again in January 2022 and September 2022; Vargo is excited by the progress being made.

In October 2020, it was announced on the game's Facebook page

that a special installment, The Mystery of Grimstone Manor, would be released for Halloween. In a similar plot to Arcana, the player is locked inside their late Uncle Victor's mysterious mansion on Halloween night and must solve the puzzles inside in order to claim their inheritance. The game was released as a YouTube video

, which the player must watch carefully to gather the clues needed, then solve the puzzles and input the correct answers on the Nox Arcana website.

The entire series provides examples of:

The cabinets contain the following tropes:

The secrets in Shadowspire will include the following:

Most mortal minds will be confused, but a clever few will be amused.