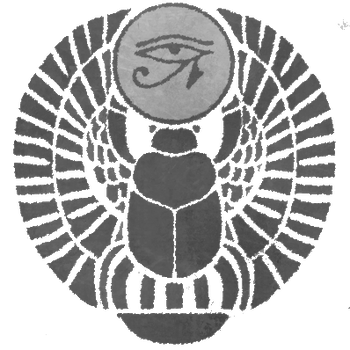 Scarabs were all the rage in Egypt.
Scarabs, a member of the Scarabaeidae family of beetles, which have often become associated with magic, power, or divinity.
Advertisement:

Scarabs have long been viewed with reverence by many human cultures, with the Trope Maker being Egyptian Mythology, making this trope Older Than Dirt. They come in many different shapes, with the iconic one being the Sacred Scarab Beetle, Scarabaeus sacer.

Whenever a scarab beetle appears, it is usually being shown as something of importance, power, magical or some manner of divine. Or when the thing is based on a scarab, implying the same. If something, or someone is using a Scarab as their name or symbol, expect them to be powerful, or important to the story.

A note: Japanese Beetle Brothers is a related trope to this, but might not be incredibly obvious at first glancenote The Kabutomushi (Japanese Rhinoceros Beetle) and Kuwagatamushi (Stag Beetle) are both members of the Scarab family, so there may often be some overlap between the two.