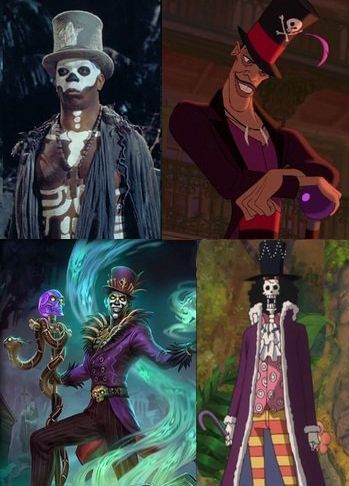 They've got friends on the other side.note Clockwise from top left: Baron Samedi, Dr. Facilier, Brook, and Baron Samedi (the actual deity, in this case).
Advertisement:

A character uses Baron Samedi, a deity/spirit from Haitian Voudoun folklore, as a design template.

Visually, this means they're probably a Scary Black Man wearing top hat and tails (black is best and darker colors in general are preferable) and having a somewhat skeletal face, possibly by use of Villainous Cheekbones, if not an actual Skull for a Head. Personality-wise, they're probably sly and somewhat sinister, and may be a bit of a hedonist (in Haitian lore, the Baron is a festive sort who loves drinking rum and partying). Where they fall on the morality axis is a little less consistent: as far as the original is concerned, Dark Is Not Evil, but characters who fit the archetype may be villainous or diabolical, since Everyone Hates Hades.

They will often practice (or be worshipped by practitioners of) Hollywood Voodoo; this makes a small degree of sense, since possession by spirits is a big part of Vodoun doctrine, and someone hoping to be "ridden" by the Baron might dress like him to try and associate with him.

See also Witch Doctor (fiction often conflates voodoo with tribal rituals from across the rainforest belt), and Red-plica Baron for another feared Baron.

Josey "The Master of Funk" is one of the Dark Purveyors, five incredibly powerful zombies from Rotten World out to spread a zombie apocalypse and create Hell on Earth.

Josey "The Master of Funk" is one of the Dark Purveyors, five incredibly powerful zombies from Rotten World out to spread a zombie apocalypse and create Hell on Earth.