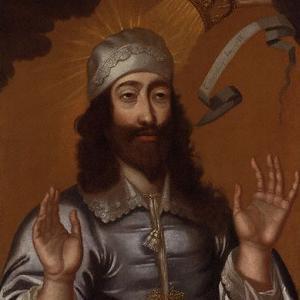 No, not Him — Charles I of England. But of course the two are easily confused...
Advertisement:

This trope refers to a character whose hairstyle and facial hair make him resemble conventional depictions of Jesus of Nazareth: i.e., a male with long hair worn loose and a simple full beard. His hair can be straight, wavy, or curly, but braids, dreadlocks and such are right out. It might overlap with Wild Hair but can be neater. There's some latitude in the length of the beard, but anything that covers the collarbone is probably too long to qualify, and braids or other affectations are right out. Bonus points if he winds up in sandals and/or a robe at any point. See also What Do You Mean, It's Not Symbolic?.

Compare Hippie Jesus, if he not only looks the part, but also acts like it.