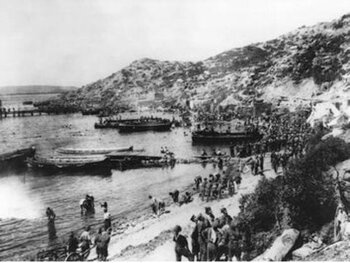 "I want to just splinter the CIA into a thousand pieces and scatter it to the wind."
—President John F. Kennedy
Advertisement:

The Bay of Pigs Invasion (known as La Batalla de Girón or Playa Girón Cuba) was an unsuccessful attempt by a CIA-trained force of Cuban exiles to invade southern Cuba with support from US government armed forces, to overthrow the Cuban government of Fidel Castro. Launched shortly after John F. Kennedy assumed presidency in 1961, the operation intended to employ similar tactics as those used in the 1954 Guatemalan coup d'état.

Recruitment by the CIA for the project began in April 1960, starting with anti-Castro Cubans in the Miami area. The CIA also planned to involve preexisting Cuban anti-Castro groups in the plot. Cuba became aware of an American plot for invasion due to their intelligence network, and mobilized some of their military in response.

April 15th: As a prelude to the invasion, the U.S. secretlynote As in, they tried to keep who was behind it a secret. The fact that there had been a bombing was obvious to anybody that cared to look. bombed three Cuban airfields. The bombings included at least one deception bomber that would be redirected back to the United States. Following the bombings, Cuban Foreign Minister Raúl Roa accused the US of being involved. US ambassador to the UN, Adlai Stevenson, stated that US armed forces would not "under any conditions" intervene in Cuba, as he was not informed of the CIA's actions.

April 16th: A diversionary flight failed to land and an attempted staged armed rising at Las Delicias Estate in Las Villas was completely quelled. No more air strikes were planned for the 16th, due to overestimated expectations of damage, caused by exaggerated claims by pilots. Later the invasion force began to form and prepare themselves for the invasion of Cuba.

April 17th: Just as the clock ticked down to April 17th, the US forces moved into the Bay of Pigs, ferrying the exiled Cuban forces under them to Cuba. The exiled Cuban forces, along with paratroopers, were moved into Cuba and quickly began to make ground. They were soon met with resistance by Cuban infantry and tanks deployed to counter their efforts.

April 18th: The initial invasion force became increasingly disorganized and scattered as skirmishes broke out between them and the Cuban military forces. Little progress was made as the invasion force was further depleted.

April 19th: More equipment and supplies were moved in to support the invasion force. A final bombing attack was slated but mostly failed with two of the five assigned bombers being shot down. As the day drew to a close, American naval ships moved in to evacuate American soldiers still in Cuba, but were eventually forced to move out by tank fire from the shore.

April 20th: With the invasion more or less failed, naval vessels scanned the Cuban shoreline for surviving Brigade soldiers, and found another 30-40 survivors before departing. The invasion was a disaster, with the invading force's beachhead no bigger than half a mile long and a quarter mile deep at any point during the fighting.

The failure indirectly led to the Cuban Missile Crisis. The Soviet Union under Nikita Khrushchev had been pursuing closer relations with Cuba for some time, but Cuba had been wary of overt friendship with the USSR. The Bay of Pigs debacle caused Cuba to fear for its independence and rally around Castro, and for their part the Soviets proved very eager to prop up the only country in recent memory to pull off a successful Communist revolution (Soviet-backed Algerian nationalist rebels had in 1962-3 notably pulled off a revolution of their own in the face of heavy-handed French oppression, but it was not a Communist revolution). Within the USA itself the Bay of Pigs fiasco humiliated the Kennedy Administration. Kennedy himself was so angered with the CIA's failure he claimed he wanted to "splinter the CIA into a thousand pieces and scatter it into the wind."