Theatre / Once On This Island 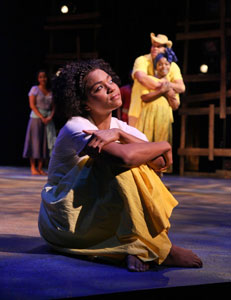 "Choose your dreams with care, Ti Moune..."
Asaka, grow me a garden,
Please Agwe, don't flood my garden.
Erzulie, who will my love be?
Papa Ge, don't come around me!
Advertisement:

Once On This Island is a musical adaptation of Rosa Guy's book My Love, My Love, or The Peasant Girl. With music by Stephen Flaherty and a book by Lynn Ahrens, the musical debuted on Broadway in 1990, and its first Broadway revival opened in December 2017. The show has been relatively successful, with three official cast recordings.

The story is a loose Caribbean retelling of "The Little Mermaid" tale, though this only becomes more obvious towards the end. On an island in the French Antilles, there is a strong gap between the rich and poor. The peasants, alienated because of their darker skin, labor and pray to the Gods every day, while the Grand Hommes (great men) live a carefree life. The four gods (Asaka, mother of the Earth, Agwe, God of water, Erzulie, Goddess of love, and Papa Ge, demon of death) are temperamental and constantly cruel. However, during one of Agwe's greatest floods, he decides to spare a young orphan girl. She is found and taken in by two peasants - Mama Euralie and Tonton Julian.

Désirée Dieu Donne (known to everyone as Ti Moune) dreams of more than just peasant life, though. Her prayers to the gods are answered when Daniel Beauxhomme, son of one of the wealthiest men on the island, crashes his car in her village (courtesy of Agwe) and she must take care of him. Determined to pursue her sudden love for the boy, she leaves for the world of the rich. But not only did she make a deal with Papa Ge to let Daniel live, she is not welcome in this bright new world.

Most people might be more familiar with the Junior version - Once On This Island Jr. got its own book, with shortened songs and some of the more mature themes edited out. This version is still regularly performed by schools and youth theatre groups throughout the US and the UK.

that Disney+ would adapt the musical into a film. Jocelyn Bioh will write the screenplay, Wanuri Kahiu will direct, and Marc Platt will produce.