But Not Too Black 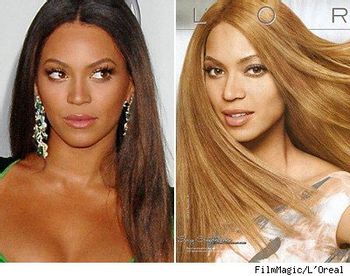 Not even Beyoncé is exempt from this trope.
"They said, 'If you was white, you'd be alright
If you was brown, stick around
But as you is black, oh brother,
Get back, get back, get back'"
— Big Bill Broonzy, "Black, Brown, and White"

After a long struggle in gaining visibility and acceptance in the entertainment world, ethnically-African American actors and actresses have many more opportunities in Hollywood and on television than they ever had before. Some have become huge stars in their own right. Unfortunately, as these new opportunities grew, a new dark side of 'racial' bias emerged.

Or should we say: "a new light side."

Fair skin is a common beauty standard by some cultures, one strengthened by Euro-centrism ('the West'note  Australia, Canada, New Zealand, the United States, and Western Europe produces or influences much of the world's media). However, most of the world's population is possessed of brown skin tones of varying shades. As the trope title states, this hits ethnic Africans particularly hard; some 'Western' casting directors are in the habit of only—or mostly—hiring non-European actors and actresses with lighter skin tones because they assume that they will be more relatable to their largely ethnic-European or European-descent audiences. Black actresses are hit even harder (as detailed here

) due to Eurocentric beauty standards favoring fair skin for women.

In a word, this phenomenon has been called "colourism."

Colourism can also come down to a latent class bias: worldwide, lighter skin (relative to one's own people) has typically been associated with wealth and lounging around indoors, and darker with poverty and working in the fields.note Yes, including societies that didn't have protectorates established over them by and/or had little contact with The European Powers, such as The Empire Of The Qing, and societies prior to Europe even being much of a thing; the Song of Solomon contains a plea not to despise the speaker for being dark due to having to work in the fields. Not until the post-war period did the trends start to reverse; the only country not devastated by The War, the USA, led a new trend which saw those with wealth being able to afford extended vacations or holidays, and the sun-induced tans that came with them, while the reduced number of people employed in agriculture meant that poor people were more likely to spend their workdays indoors in factories (or later call centres and offices) instead of out in the fields.

Skin colour is only the most obvious manifestation of the underlying theme of casting people on the basis of something other than their acting style and/or ability. For example, an Asian actor might be asked to cover his eyes or a black actress asked to straighten her hair. Colourism is a subset of "degreeism" in which members of a marginalized group rank themselves based on how closely they resemble the dominant group.

Variations of this casting trope are also seen in Latin America, Northern Africa/Western Asia, and East Asia. This trope is a common source of Unfortunate Implications; given this trope's prevalence throughout the world's entertainment industries, there are numerous variations on this trope listed below. Note also how the changing definitions of desirability have resulted in new and/or different hiring biases over time. This can actually go the other way round too, particularly in casting from people who are attempting to avert this trope; where mixed race or lighter skinned actors can be turned down for not being "black enough". Of course in that case, the ideal solution would be to represent more characters beyond the Token Minority - allowing for more diversity in skin tones.

Also see But Not Too Foreign, Mixed Ancestry is Attractive, and Ambiguously Brown. Contrast with But Not Too White (though it's not the trope's total opposite) and Half-Breed Discrimination.

Compare The Whitest Black Guy for when black characters are said to be 'acting white' as opposed to 'looking white.' Not to be confused with Light Is Not Good or Pass Fail, though it can be somewhat related to the latter insofar as the casting choice is concerned.

Not related to the sitcom black•ish, though the show does deal with this trope as a running theme.