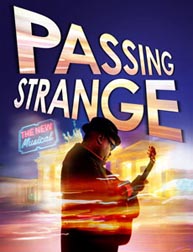 "'Today my edges dull together
Yeah, that's it!
And there's no point left to dream.
I want to scream!
MAMAAA! Mariana, and Moroccan hash have gotten me stoned!
And I can't find my way home!'"
- Stoned.
"'I let my pain FUCK my EGO
and I call the bastard ART!'"
- Youth brands himself the "twentieth century incarnate."
Advertisement:

Passing Strange is a musical by Stew and Heidi Rodewald (of the band "The Negro Problem") that premiered on Broadway in 2008. It was directed by (and "created in collaboration with") Annie Dorsen, and was nominated for several Tony Awards, winning for Best Book.

It follows a discontented, middle-class black teenager (referred to only as "Youth"), as he leaves his home and his mom in Los Angeles to find artistic freedom and the ever-elusive idea called "The Real" in Europe, first in Amsterdam, and then in Berlin. The story is loosely based off of Stew's own experiences as a young man. The show is performed by seven actors and an on-stage band, with no set. It is often said to be a combination of a standard musical and a rock concert, being mostly-sung through and somewhat interactive on the part of the Narrator.

Its final few performances were recorded by Spike Lee (one of the show's biggest fans) and edited into a "concert movie"-style film version, which is currently playing at the IFC theatre in New York City, and is available On Demand, and on DVD.