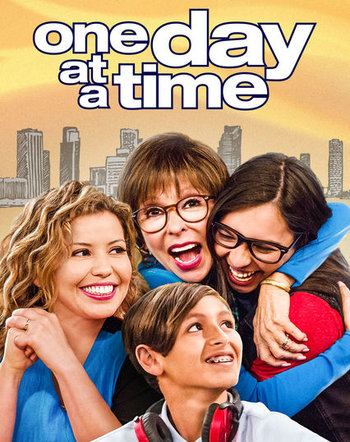 Like the original series, the remake centers around a divorced mom, Penelope (Justina Machado), raising her two kids, Elena (Isabella Gómez) and Alex (Marcel Ruiz). They live with Penelope's mother, Lydia (Rita Moreno), in an apartment owned by Schneider (Todd Grinnell), and try to navigate the ups and downs of life.

While the family in the original show were Italian-Americans, here they are Cuban-Americans. As such, issues of race, ethnicity, and Cuban cultural heritage play a large part, and the series doesn't shy way from addressing other political topics as well. The series was co-created by Gloria Calderón Kellett, who is Cuban-American herself, and is produced by Norman Lear, who developed the original series.

The series was canceled by Netflix in March 2019 after three seasons, with them citing low ratings as the reason, but Pop TV picked it up for a fourth season that came out in 2020. This makes One Day at Time the first series to make the jump from a streaming platform to a traditional terrestrial network. The fourth season later aired second-run on CBS beginning in October 2020, reuniting the show with the original's home network. However, following the fourth season, it was cancelled for good.

Now has a page in Spanish, ¡Azúcar!

One Day at a Time contains examples of: