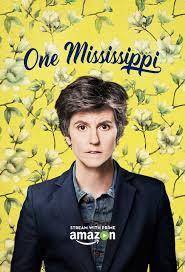 One Mississippi is a 2015-2017 series released on Prime Video, created by Tig Notaro and Diablo Cody, and starring Notaro.

It's a semi-fictionalized account of Tig Notaro's life dealing with breast cancer, bilateral mastectomy, losing her mother in a freak accident, dealing with her widowed stepfather, and getting dumped by her girlfriend. Naturally, it also manages to be darkly comedic like the woman herself.