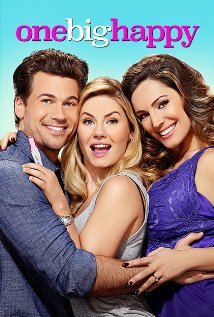 A Family is Born
Nurse: So you're his wife?
Prudence: Oh no, I'm his wife.
Lizzy: Yeah, I'm his lesbian best friend.
Prudence: She's having his baby.
Lizzy: We all live together.
— Liz and Prudence summing up the series.
Advertisement:

One Big Happy was an NBC sitcom produced by Ellen Degeneres, which began airing in March 2015.

Luke (Nick Zano) and Lizzy (Elisha Cuthbert) have been best friends since childhood. They went to prom together, they live together, and Luke knew Lizzy was gay before she did. Now that they're thirty and single, they've decided to make good on a pact they made years ago to make and raise a baby together. Unfortunately, they haven't been very successful conceiving and Lizzy is ready to throw in the towel...

Enter Prudence (Kelly Brook), a young British girl who's spending her last few days in America having fun before being deported. Luke meets her at a bar and they hit it off immediately, falling in love within the day and getting married in Las Vegas so that Prudence can stay in America. Just in time for Lizzy to announce that she's finally pregnant. Thus begins the story of a man, his wife, and his pregnant lesbian best friend all living together and trying to be some kind of family.

The series lasted for one truncated six-episode season before being cancelled by NBC.

This show has no relation to the comic strip of the same name.