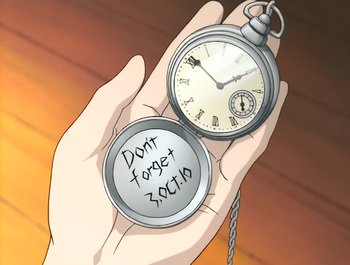 An object which is the embodiment or representation of the solid, happy relationship between two characters, or of an important memory or period in someone's life. But unlike an ordinary Tragic Keepsake or Friendship Trinket, the Memento MacGuffin plays a critical role in the story.
Advertisement:

Sometimes it's as obvious as a piece of jewelry like an engagement/wedding ring, or a wedding video, or a photograph of a beloved, or a prized heirloom. It can also be a love note or just some small gift, such as a stuffed toy. It can even be a location, such as a childhood home or a favorite corner market, an old building imbued with poignant memories or an entire town. Such a memento can represent romantic partners, deep friendships, familial relationships or even esoteric connections. Whatever the item, and whatever the nature of the relationship, there is a symbolic yet very real form of Synchronization between the Memento MacGuffin and the relationship, and because of that, it tends to also be a #1 Dime.

These items tend to give a lot of exposition and, rather than being true MacGuffins, can play a central role in the plot. Unfortunately, they also tend to be rather luckless. On the other hand, if a character deliberately disposes of the item, it's because It's All Junk. Also, if the character acquires it through a very sad experience, it's a Tragic Keepsake that might be held during a Cradle of Loneliness.

If, however, a character's parents are conspicuous by their absence, or completely unknown, that "treasure" the character carts around with them is probably a specific type of Memento MacGuffin—the Orphan's Plot Trinket. Expect it to be important.

Compare Hold on to My Hat.