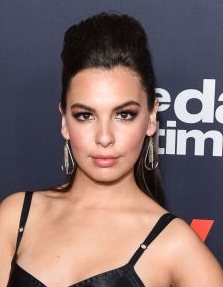 Most famous as nerdy fifteen-year-olds
Isabella Gómez Mejia (born 9 February 1998 in Medellín, Colombia) is a Colombian actress, who moved to Florida in 2008 with her family to further her acting, though she didn't know English when she arrived in the US. She had been acting in her native Colombia, and has since had roles in several TV shows.

After being in her first big role in Matador, she moved to Echo Park, Los Angeles — a place so popular with Latin American immigrants that it's where her next big character, in One Day At A Time, lives, a role that she's won an Imagen Award for her portrayal of. Both of these characters have storylines about a quinceañera, which is something that Isabella didn't actually have.