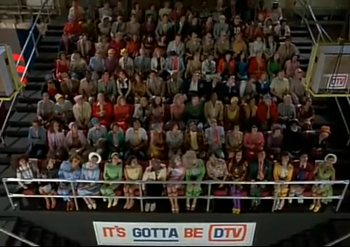 You're Denton, Denton U.S.A!
"Now a word to our audience: Even though we are being broadcast on Fox, there’s no need for obnoxious hooting and hollering."
— Larry King (whose advice is immediately ignored), The Simpsons
Advertisement:

This trope was typed before a live studio audience.

The Studio Audience is an audience that sits behind the cameras and views the show as it is taped or filmed (or, in some cases, Broadcast Live). The audience is there to provide feedback to the actors or hosts and give the onstage talent someone to play to.

For a more predictable response, some shows dispense with the studio audience and use a Laugh Track to fill in where an audience 'should' laugh. There are a few crowd noises that are fairly standard with audiences.