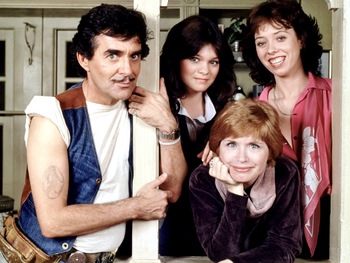 "Stay out of it, shrimp! This is MY crisis!"
"This is it (This is it)
This is life, the one you get
So go and have a ball..."
Advertisement:

The show centers around Ann Romano (Bonnie Franklin), who moves to Indianapolis to start anew after a rocky divorce, along with her teen daughters Julie (Mackenzie Phillips) and Barbara (Valerie Bertinelli), as they face the various trials of adjusting to their new life. Meanwhile, their apartment building's superintendent, a Casanova Wannabe named Schneider (Pat Harrington Jr.), joins in the wacky adventures.

One of the many hit sitcoms developed by producer Norman Lear in the '70s, the show is probably best remembered nowadays for its catchy theme song, a preponderance of Very Special Episodes, and the offscreen travails of Mackenzie Phillips.

A remake of the series debuted in 2017 on Netflix.

Example of:
And Starring