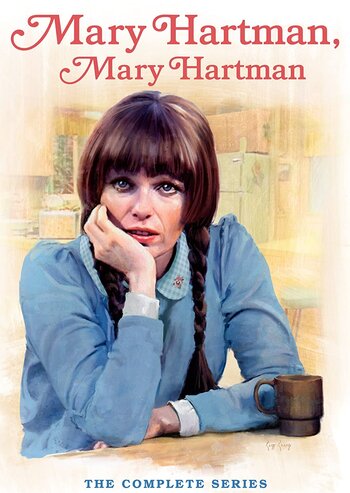 Mary Hartman, Mary Hartman (sometimes abbreviated as MHMH or MH2) is an American parody soap opera developed by Norman Lear in 1976. The reason the title is a repetition of the main character's name is because of an observation by Lear, that everything said on a soap opera was said twice.

The show is set in the fictional town of Fernwood, Ohio, and revolves around a neighborhood of lower-middle-class characters, including perpetually frazzled Housewife Mary Hartman (Louise Lasser), her emotionally distant husband Tom (Greg Mallavey), her "serial monogamist" sister Cathy (Debralee Scott), and her wannabe country-western-singer friend Loretta (Mary Kay Place), as well as a multitude of supporting characters. Soap opera cliches, such as adultery and over-the-top character deaths, are often satirized in absurdist ways on the show, but they are just as often used for genuine dramatic effect, making Mary Hartman, Mary Hartman more of a Dramedy than a flat-out farce.

The show aired in First-Run Syndication Monday through Friday. Following the departure of series star Louise Lasser after two seasons and 325 episodes, it was retooled as Forever Fernwood in 1978, lasting another 26 weeks (130 episodes) before getting cancelled. Also spawned the Spin-Off/continuation Fernwood Tonight.

Contrast Soap, a much more overtly comedic take on the soap opera parody, also from The '70s.