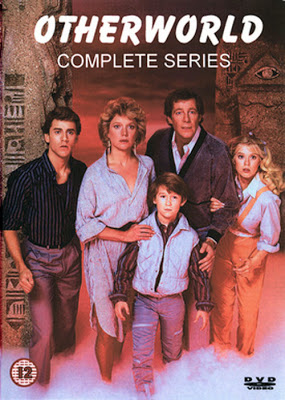 Otherworld was a science fiction series that aired on CBS in 1985. It followed the Sterling family, who got Trapped in Another World when they went on a tour of the Great Pyramid at Giza, Egypt, during a rare conjunction of planets. They end up in a world called Thel, that is under an authoritarian regime, with apparently no means to return home.

Even worse, the family quickly gets on the wrong side of Kommander Nuveen Kroll, a high-ranking officer in this government, when they flag him down on a highway for some help. He tries to arrest the family, and they are forced to overpower him and take his access crystal that allows them to access any government computer system in the Otherworld, giving them their one edge to keep ahead of his relentless pursuit of them. Unfortunately, recovering that crystal after that embarrassing incident is enough for him for that officer to maintain that pursuit after branding them as wanted terrorists.

Now, that family must keep on the move, encountering that world's bizarre various cultures that have developed in the regime's enforced regional isolation zones as they to find a way home.

The show did not do well in the ratings and lasted only eight episodes before being canceled.