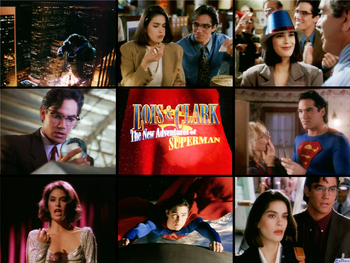 I remember these scenes, they were all in the pilot!note Actually they are all from the pilot except for the middle left (episode 2) and bottom left (episode 6).
A Title Sequence composed primarily of clips from the series, sometimes intercut with artistic elements. Probably the most common form of Title Sequence for American shows, particularly sitcoms, but relatively rare in British series.
Advertisement:

The content of a Title Montage is similar to that of Previously on…, but is closer in format to a Blipvert.

Often, the montage will be updated from time to time with new material, making them Evolving Credits. In an Action Series, it is traditional for the sequence to end with a Power Walk (This usage is sometimes called a "Hero Shot").

Sister trope to Credits Montage, which involves doing something similar for the closing credits. Compare Placeholder Titles, which are similar in execution, but done because the real opening isn't ready. If the opening titles montage a bunch of cast interactions that aren't clips from the show but were specially filmed for the titles, that's an Opening Credits Cast Party.